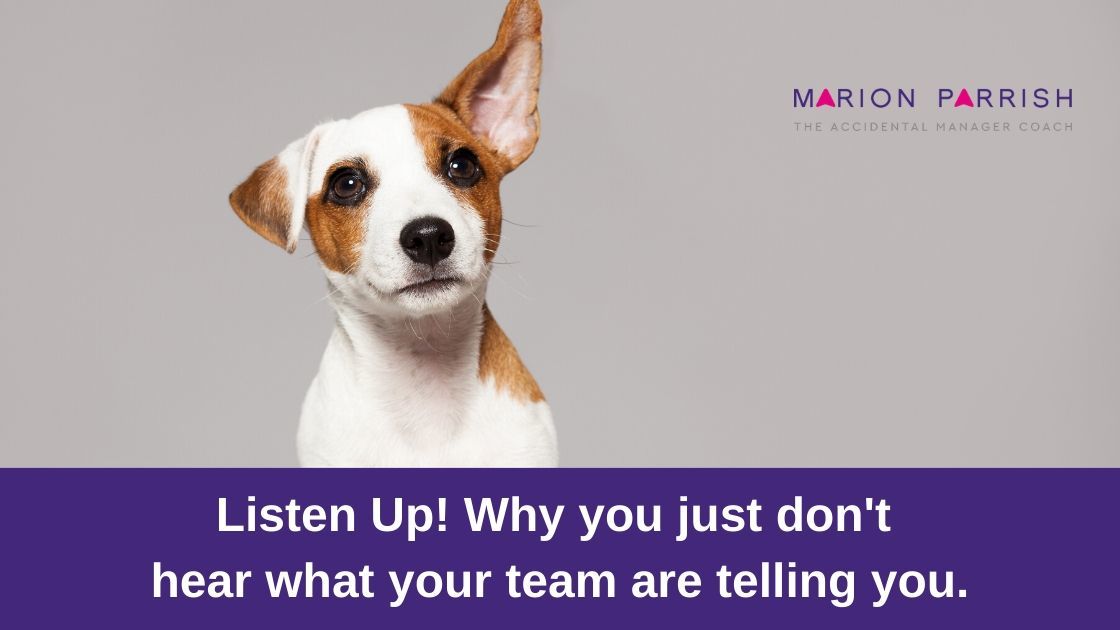 Listen Up! Why you just don’t hear what your team are telling you

Posted on 20th November 2019 at 14:01
You know that moment when you finally pluck up the courage to tell someone what you really think? You’ve rehearsed in your mind the different arguments you are going to use, adapted your words to give maximum impact, played the conversation over and over in your mind, thinking about all the arguments the other person might counter with and what your response might be, and chosen your moment carefully to ensure you have the other person’s undivided attention.
You nervously open your mouth, and begin with your well-practised opening line. You’re just starting on the second or third sentence when…
You are interrupted, quite abruptly, and told you have got it all wrong. The other person talks over you, telling you exactly why, in their view, you are completely and utterly mistaken.
How does it feel?
It happened to me this week. I had some feedback for someone, and I knew they wouldn’t like it. But I was a paying customer, and the issue mattered to me. I thought avoidable mistakes were being made and it was important to me to get my point across and know my concerns had registered. I wasn’t being unnecessarily negative or refusing to embrace change – I genuinely wanted to help the organisation to get things right.
But I wasn’t allowed to finish what I was saying before I was told I was completely wrong, didn’t have all the information the other person had (and which they didn’t want to share) and they proceeded to talk over me and tell me what they thought for the next few minutes until I ended the conversation and moved away.
My grievance – the full, thought through argument I wanted to make for why I disagreed with someone’s proposals for the future – is still unspoken. It’s still sitting inside me, and - if I choose to let it - it will fester and grow.
Because I now have a second grievance – I wasn’t heard when I tried to speak.
I see this a lot in the workplace. Employees who have genuine concerns about their work, how they are treated or the direction the business is taking are often given very little opportunity or time to make their concerns known. They start to speak, their manager jumps to conclusions about what they are going to say, and then tries to “solve” the problem without ever really understanding what that problem actually is.
Stephen Covey, in his best-selling book “The Seven Habits of Highly Effective People” says,
“Most people do not listen with the intent to understand; they listen with the intent to reply. They’re either speaking or preparing to speak. They’re filtering everything through their own paradigms, reading their autobiography into other people’s lives.”
Covey goes on to describe 5 levels of listening.
Ignoring – where we're not really listening at all
Pretending – where we say the things we have learnt in active listening lessons. “Yes”, “uh huh” to give an impression of listening, when we aren’t really.
Selective listening – where we only listen to certain parts of the conversation and tune out other parts.
Attentive listening – where we pay attention and focus energy on the words that are being said.
Empathic listening – listening with intent to understand, to really get inside another person’s frame of reference and see the world as they see it, rather than as you see it.
Empathic listening means listening with your ears but also with your eyes and your heart. Listening for feeling and meaning and behaviour. Trying to understand why this is important for the other person, and really attempting to feel what they are feeling.
When team members feel they have been listened to and really heard and understood, then even if you can’t change the thing they were concerned about, they are more likely to accept a change.
They’ve been given time and space to say what’s on their mind. They’ve been heard. Their opinion has been considered. They feel valued and appreciated.
You can spend a lot of money on staff surveys, wellbeing initiatives or focus groups to find out how people are feeling at work.
But all you really need to do is listen.
Find out more about my bespoke 1:1 coaching package for accidental managers, which puts you back in control of your team, your time and your sanity.
Tagged as: Accidental Managers, Change, Communication, Managing People
Share this post: